A chat with the team of The Prefect

Dan Smyth and Marcie MacLellan are the director and producer of The Prefect, one of the two English projects selected for the first workshop of the first edition of Biennale College – Cinema. A subtle psychological drama, The Prefect tells the story of 16-year old Darren. One day his beliefs start to crumble as his father, a well respected doctor, is put on trial for mass murder. Darren’s memories start to haunt him as he struggles to free himself from the sins of his father. We caught up with Dan and Marcie and had a little chat about the experience of the workshop, about The Prefect, their new projects and about their future.

“The workshop really did inject the project with some proverbial sizzurp”, told us Dan. “With two story developers, fourteen other teams and my producer all giving their two cents on the story, I was immersed in opinions and ideas which helped the development, and to some extent, also helped me clarify and articulate my own vision. The hard work and attention definitely gave the project momentum”. Marcie told us that, from a producer’s perspective, the workshop helped her “to identify and address any areas of concern from potential financiers with respect to budget and scheduling. Of course, it was great sign of the potential of our project that we were short listed among so many talented people from all around the world. This gave Dan and I continued momentum to bring the film forward”.

The Prefect is still moving forward and the team has continued to tighten the story: “I’ve been selected for the EIFF Talent Lab 2013″, added Dan, “and will be discussing ways to get the film made there. The Prefect was also selected for the summer development of iFeature2″. “We remain convinced of its viability as a compelling and captivating feature”, added Marcie. “To help demonstrate the style and visualisation of the different timelines within the film, Dan and I have just finished shooting a short film, entitled Off Yer ‘Ead. This is a strong story in its own right, and also serves to demonstrate what Dan and I can deliver on tight timelines and tight budgets”. Off Yer ‘Ead stars stars Andrew Shim (This Is England) and Aliya Gulamani (a young talent from the Royal Court).

Dan, whose latest short film Myra is still screening at selected festivals and had a bis success at the ECU in Paris (where Caroline Burns Cooke won the best actress award for her role in the film), has other feature ideas in early development. “I’m also looking at new feature film ideas as part of a UK scheme called Triangle funded by Screen Yorkshire”, told us the director. Happy for being his partner in such exciting projects, Marcie said that “Dan continues to be recognised through various programmes as a leading talent in the UK”, and in the meantime she has a few ideas on her own. “My production company continues to grow by leaps and bounds”, she added. “In late 2013, I will also return to my journalism roots with the production of a new feature length documentary”.

The video of the official presentation of The Prefect at the Biennale on January 17th 2013: 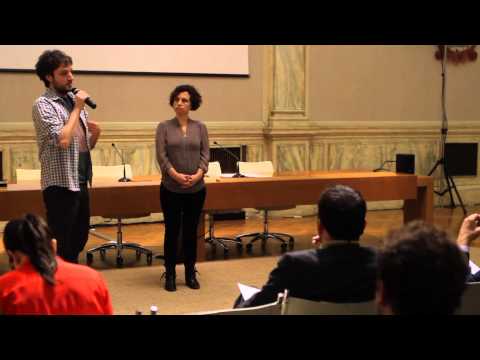