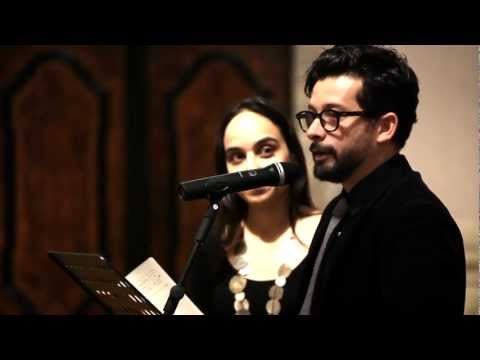 New synopsis, micro-budget concept and notes from the director

Based on a true case, THE DEATH OF J.P. CUENCA tells a mysterious story involving the writer/director João Paulo Cuenca and an anonymous doppelgänger who, considered dead in 2008, had been using the name and identity of the writer before being found lifeless in a small apartment of an squat building downtown Rio de Janeiro. Directed by Cuenca himself with the creative supervision of Felipe Bragança and Marina Meliande, the film accompanies the writer investigating the fact, which has been recently discovered, until a plot of mystery leads him into the personification of his double.

If in fiction and crime news pages it is a cliché for living people to steal the identity of dead ones to start a new life, what we have here is the opposite case: someone who steals the identity of a living person to die. In a time when Rio de Janeiro is undergoing a lot of changes – on the one hand, neighborhoods and favelas are being revitalized and, on the other, dozens of thousands of residents are being removed from their homes – this is not only the story of someone who sees himself swallowed into the underworld of his city, but also the story of a couple who lives in the invaded building located on Relação Street, in the carioca historical bohemian neighborhood of Lapa, and is struck by tragedy. Finally, it is the story of a police and cinematic investigation ‐ the search for answers in a city that is well‐known for not offering them.

It’s July 13th, 2008, and it’s sunny in Rome. The same date on which the writer João Paulo Cuenca is in a crowded bookstore in Trastevere launching the Italian translation of a novel, he is considered dead in an invaded building downtown Rio de Janeiro. The Occurrence Report no. 005‐0591/2008, the Body Removal Form no. 042435‐1005/2008 and the Autopsy Report no. 04331/08 certify that João Paulo Vieira Machado de Cuenca, son of Maria Teresa Vieira Machado and Juan José Cuenca, whose birth certificate is no. PED219 4177LV255A, is dead.

It was only nine days later at the Medico‐Legal Institute that the corpse was correctly identified after digital prints were taken that didn’t match the identity and the document that had been following the deceased man so far. His real name was Sérgio Luiz de Almeida Couto and he left a wife, Cristiane Paixão Ribeiro, who had identified him and confirmed the “stolen” name. Why? What did they want to conceal? Did they know the likewise named writer? What offenses were they hiding in their criminal records? How did they get those documents? Why was the autopsy report dated more than 3 months after the man’s death?

The film will be developed along two parallel axes: on one side, the investigation by J.P.Cuenca and detectives into the life of the man who had been using his name (an indigent from the neighborhood of Lapa, Rio de Janeiro, according to information revealed by the Police), and, on the other, the emotional and symbolical effects of the case on himself, until the point that the life of his doppelgänger and his own focus into the same looping mirrored narrative.
The idea is to create a film that will have a seductive and inventive narrative, in which questions will be raised such as the identity of the author, the different “occupation” of places in Rio de Janeiro seen through artistic eyes and ways of representing life and death in the city today. With a experienced low-budget producer team of 13 people, the director will embark on an filming process mostly on set over the winding streets of downtown Rio de Janeiro, which today is going through huge changes, remodeling works and resident’s removals, trying to find the traces of this ghost of himself and, at the same time, to understand the aspects and feelings that approach them and keep them apart as real people.
Who is the real J.P. Cuenca and who is the impostor? The director or his doppelgänger? Who imitates whom? Who is now trying to imitate whom? What identities are created and what identities are lost in the heart of the city today? What are their limits? Between the South Zone of the city and the book release cocktail parties of J.P. Cuenca, the director, and the underworld of tenements, invasions and abandonment of the life of J.P. Cuenca, the “impostor”, two forms of truth will be pursued: the objective truth, trying to understand who this man was who imitated the writer in his name, photo and ID card, and the imaginary truth, where the writer will project himself into the empty space left by his dead imitator, imagining a different life for him. THE DEATH OF JP CUENCA is a film whose original premise is rare, real and emotional, connected intrinsically with the historical moment of the city it is set in.

NOTES FROM THE DIRECTOR

1- This film is driven by the impulse to create a space that is both physical and mental. The dialogue between the architecture of the city and the inner questions about identity raised by the main character must be expressed in image form. The duplicities and “matrioshka dolls” of our spiral detective narrative will also be in frame.

2- As identity lines are crossed, the character and his city goes to a process of vacillating equilibrium. We are talking about the limits that defines us. If we lose them, we miss our points of reference. We end hovering between one dimension and another. The confined (Polanski, Lumet) and open (Antonioni, Glauber Rocha) spaces we will use on this film will reflect this.

3 – The real event (or micro-event, in Walter Benjamin’s terms) of my identity-theft is only important as it helps me to create this fictional narrative. The mystery I want to solve is more than just finding the truth about “my” case. It is proposing those contemporary questions about identity and space in a cinematic way.

4- The performance aspect of this film – the fact that the main character can be played by himself (a copy of himself) and that we’re using some non-actors in suggested/improvised mise-en-scène moments – is only important if it’s useful to create an truly fictional experience for the viewer. It is not a achievement on its own.

5- Based on personal docudramas such as the ones by the filmmaker Agnes Varda, by the Dutch documentarian Johan van der Keuken and by works as “I am fiction”, by Danish performance artist and filmmaker Thomas Altheimer, the film will have the process of research into the case along its shooting process. The detectives we will use on screen will be real – as the images produced by one of them spying the main character with a HD cheap camera.

6- When you face a mirror against another, as seen in the elegant rooms of Caffè Florian in Piazza San Marco, you have a distorted effect that only can be seen by the opposition of reflection over reflection. This distortions on an endless tunnel of mirrors is reality.

7- Cities are becoming copies of different cities. But, sometimes, a city starts copying itself. In Rio de Janeiro, even the favela parties and bars are starting to look like copies of those found at street level, in a kind of Möbius strip of gentrification. The historical bohemian neighborhood of Lapa in downtown Rio, where the film is set, is a central example of this process of folkloric self-replication. The urban reform we see in most cities of the world relates directly to identity and self-image issues.

8- In how much time the venetian channels reconstructed inside the gigantic “The Venetian” casino in Macau, China, will be recognized as authentic historical buildings, as we think today of the european colonization traces on latin-american cities like Rio?

9- Because Rio de Janeiro will host a World Cup final, an Olympic Games and it’s the symbolical capital of Brazil, one of the world rising new economic superpowers, the city is getting more investments the next years than any other city in the world. It is believed that the future of the “country of the future” has arrived. Has it?

10- Under the pretext of revitalization, a word that in pre-olympics times can justify all kinds of atrocities, removals and arbitrary displacements, tens of thousands of people are being ejected from their homes in Rio to create unlimited space for the new absolute owners of gentrified areas: developers and their armed/political allies. Marks painted on doors sprang up like death sentences to determine which houses were to be demolished in forty-eight hours in many ghettos of Rio.

11- The underworld which the film’s main character is dragged into – as some of those classic Hitchcock’s ordinary “wrong men” who are suddenly sucked into a plot of muder and mystery – relates to that Rio de Janeiro, almost invisible for the local media. In the end, the investigation is about a identity theft, not only from a man, but from a whole city. The wrongcity. That said, the noir cinema from Hitchcock, the North American Direct Cinema from the 60′s and the cinema of confinement of early Roman Polanski works are points of reference for this film.

12- The film is not a ideological judgmental documentary or fiction film about the effects of gentrification and urban reforms. But this changing social/urban scene is in the heart of it.

13- On the Google Maps street view of the building that is our main location (“Rua da Relação, 43, Rio de Janeiro – http://goo.gl/maps/AJGGV– building on the left), we can see it being reconstructed. But that’s already an image from the past. Now the address I was officially pronounced dead in a homeless squat is a fully renewed luxury condo:

http://www.juliobogoricin.com/soul/PowerPoint%20Presentation.swf. On the Google street view of the new mirrored Petrobras building, another of our important locations, we can see it still being constructed – http://goo.gl/maps/oOsB0. It is very important to shoot this film in 2013, while these blocks (our filming set) are still construction sites. Otherwise it will be impossible to capture the in-between space and time of the area.

14- Pauline Kael once wrote that Hollywood is a place where you could die of encouragement. I just found out that Venice can be quite the opposite. The tutoring we’ve got in those unforgettable and intense days in San Servolo Island will be of definitive importance for the film, which was deeply reshaped by the experience.

The Death of J.P. Cuenca: storyline